It's come to my attention that Modi'in has just celebrated a very special birthday. Modi'in has turned 13 this July and I for one would like to wish it a Mazal Tov. (But no presents; you get enough from me in Arnona [property taxes]).

It seems that the first resident of Modi'in, Gadi Mizrachi, moved into his apartment on Emek Hachula in July of 1996. He moved in to an apartment that wasn't completely ready and had no electricity or water, (but I imagine he never had trouble finding a parking spot). Mr. Mizrachi also has the honor of opening up the first business in the city, a stationary store. The first supermarket store came one month later (by which time the city's population had already increased over 100 fold). When Mr. Mizrachi moved in, the area where we live was still a mountain.

A bit of history: It was Moshe Dayan, in 1963, in his role as Minister of Agriculture that first toyed with the idea of re-establishing the native land of the Chashmonaim (who revolted against the Greeks in the famous Chanukah story) and turning it into a modern city called "Modi'in", named after the nearby ancient city of Modi'in described in the Talmud. It took 30 years until the cornerstone of the city was laid.

Modi'in is centrally located, midway between Jerusalem and Tel-Aviv. It is a planned city, designed by famous architect Moshe Safdie. In noting the hills and valleys of the area, Mr. Safdie decided to place the parks, schools, shopping centers in the valleys, and have the residential areas rise up on either side. Apparently, city planners also had the resident's health in mind: some of these hills are killers.

What I love about living in this city is watching it grow before my eyes. One day I'll see a pile of rubble and the next day a new supermarket rises (down the block from me!). Since we've arrived, the two train stations (12 minutes to Ben Gurion Airport, 17 minutes to Tel Aviv) and much to my daughters' delight, the MALL, have been opened. A town pool is coming soon, according to rumor. New highways, roads, traffic circles are constantly being finished, which sometimes makes for some amusing (or maybe not) roadtrips. I love driving down to the new Menachem Begin Blvd. in the new Moriah neighborhood, at the end of Modi'in. It feels like the end of the world. It is a complete construction zone, yet some of the buidlings are ready and you see signs of life there: cars in driveways, laundry hanging out, toys on the porches. And I look over at the next hill and wonder when that will be filled with homes and buildings.

I'm a newbie here. I have friends who have been here ten or eleven years, when the city was mostly hills and rocks. They speak very fondly of those early years, but I know that Modi'in is still a city in its infancy (okay in its teenage years, but you get what I'm saying). Someday in the distant future, I will also remember what the city was like way-back-when and how it has flourished. I am glad that I came when I did, in time to watch it grow.

Mazal tov to my new city. May you continue to grow and prosper! 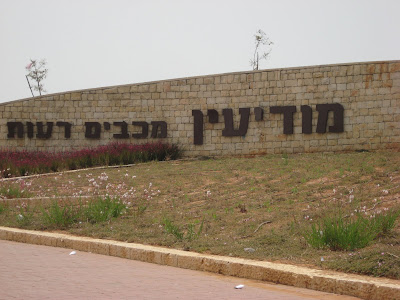 The entrance to Modi'in
Posted by Baila at 11:50 AM

There's no public pool in Modiin??
In Maale Adumim, we've got two - and we are half your size!!

I remember visiting Modiin in 1999 with my then-husband. I was really unhappy living in Lod (who wouldn't be?) and we were looking for a new neighborhood to move to. I was impressed by the extensive development that the city had planned, but I just couldn't imagine negotiating those steep hills every day. For me, that was the dealbreaker.
I would love to see what Modiin looks like now. I imagine that is a nice place to live.

I liked it when I was there last year - we had fun in the park! Great park system you have there.

happy bday modi'in! very glad to be living in such a well-thought out city, tho sometimes - particularly when driving down Derech HaMall at 8 AM, - i wonder, "someone actually PLANNED this???"

Hard to believe that so much has been accomplished in just 13 years, but to echo Gila Rose's sentiment, who planned the new traffic pattern to Yishpro Center?

I didn't say Modi'in was perfect--but it is great. The pool is coming. Patience is a virtue.

The hills are crazy, I'll give you that. But you were in Lod????

Great parks here. And I live right across the street from one of them.

Mazel Tov to my future home!

Anonymous, reveal yourself! (e-mail me if you don't want to announce this to the millions reading this blog)

Gadi was also the first postman, this being his first employment in Modi'in as his store had yet to be built. As for myself, I moved in Sept. 1996.