Can you miss someone you've never met?

It's June 25, 2010. That means Gilad Shalit has been held in captivity by Hamas terrorists for four years.

Here in Israel, I often hear a phrase spoken by a family member, mostly parents, to describe another family member; they will say about the person, "our ________ ". So for example, when a mother talks about her daugher Keren, she will often say "קרן שלנו" ["Keren shelanu"]--our Keren. There's something very poignant about that to me.

Me, I can't believe our Gilad has been gone four years.

There is another soldier, an air force pilot whose name is Ron Arad. Arad was captured in 1986, and aside from some correspondence in 1987, has not been heard from since.

While tooling around the blogosphere, I found this video on Lion of Zion's blog. The song is "Keshetavo"--"When you will come back". On that day, the singer says "נשיר ברון" [NaShir beron]--"We will sing with Ron". "Ron", Arad's first name, in Hebrew means joy.

I think the song is appropriate today, as we remember and pray for both Gilad and Ron.

May that day that we sing with Ron--and Gilad--come soon.

It seems the hot weather is here to stay, and it's only going to get hotter. I think I'm learning to tolerate the heat better; still, the person who invented air conditioning should have won a Nobel Prize.

Of course in this weather, only the barest of shoes can be tolerated and we went sandal shopping (oh joy! you know how much I love shopping)* the other week. After two weeks the soles Orli's sandals were already splitting. After lamenting the poor quality (but still high prices) of shoes here, I stopped in the store on a lark to let them know. To my utter surprise the sweet girl there told me to bring them in, that the shoes in their store were under warranty.

How could they put such cr@#%py shoes under warranty? Never mind, I brought Orli back, she picked out another pair and we all walked away happy. I guess if I have to, I'll exchange the shoes every two weeks. 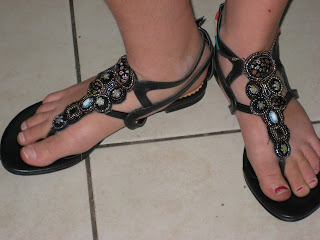 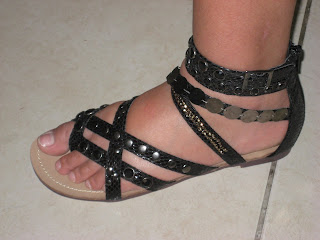 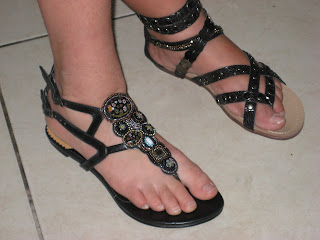 And both come with a warranty! (Now I feel much better about the not-so-great quality)

For more summer pictures visit Robin's Summer Stock Sunday at Around the Island. 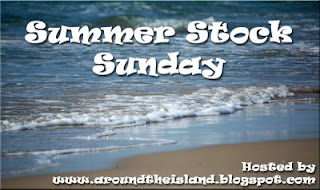 Is school over yet?

My younger two, Tali and Orli, attend the local Ulpana (girl's high school) here in Modi'in. Both of them are happy there, have lots of friends and are even learning a bit.

But this drives me insane.

Now, I think school uniforms are fine. Certainly makes a mother's life easier and theoretically should cut down on the clothing budget.

The local ulpana's school uniform is a baseball jersey that comes in a variety of lovely and gruesome color combos with the school logo on the front and something else on the back of the shirt. It's not particularly flattering, but that probably is the point.

As you can imagine the girls just love wearing that uniform. Meaning they do everything they can to get out of it.

I insist they wear it, but I am met with resistance from....the ulpana itself.

As soon as the winter comes (which means, here in Modi'in you may need to don a light sweater), the kids are no longer required to wear them, because it's cold and they're wearing sweatshirts anyway.

Finally, if you are tiny, big, skinny, fat, tall or short you may be excused from wearing the uniform because the shirt may not fit properly (which is such a load of...).

So I argue all the time with the kids about putting on their uniform and then drop them off at school listening to them say, "you see how many kids don't wear it".

I mean if you have a rule, stick to it.

Which is what I'm doing now. Everyone wears their uniform, whether their teacher cares or not.

It's fun times in the morning here at Casa Baila.
Posted by Baila at 10:42 AM 6 comments:

What a way to make a livin'

Just some news from the work front.

I've now been 2+ years at my current place of work. I know how the place works, the politics. People know me and I feel comfortable there.

Professionally, I'm excited to say that the politicians have come to their senses and I will be receiving a license here in Israel. It should arrive within the next decade or so, but in the meantime I am working legally and can say my education, license and experience is recognized by the Ministry of Health.

I've been attending a Continuing Education course on Alternative and Augmentative Communication (AAC) once weekly since January. The course was sponsored and completely paid for by my place of work. It was given by one of the top people in the field, worldwide, who lives here in little 'ol Israel. She has become a mentor of sorts. It was an amazing opportunity and I am very appreciative of it. It seems that after all these years of being a practising speech therapist, I am finally developing an area of expertise. I am debating taking this to a whole new level by getting even more training and then marketing myself to this niche here in Israel.

On the last day of the course I was asked to present an example of some treatment based on the theories we had been learning. It was to be presented to the other attendees as well the people in charge of organizing the course and the college through which some of the others got credit for. Of course I had to present in Hebrew. I was a nervouse wreck. I sped through the thing, knowing that had I presented in English I would have done a much better, thorough job. Still I got some Kol HaKavods [atta girl] and I just responded by saying thank you, rather than saying, "Oh but I was awful", which I was.

I guess that's the update. If any of you know anyone who needs some speech therapy in the Modi'in area, I'm your girl.
Posted by Baila at 6:58 AM 6 comments:

What did your teenager do today? One of mine practised Beatles' Songs on her new electric guitar. The other started packing up her room for our upcoming move. The third one went swimming with her friends. Good kids, all.

But Danny's parents must be really proud. Look what he did:

When Danny is asked by the media how he knows what happened (at about 3:38 minutes), he answered, "I'm an informed person".

You think you can no longer defend Israel? You can, if you are an informed person like this high school kid.
Posted by Baila at 11:04 AM 2 comments: