Woof! A report from Ozzy the wonderdog

Finally,it's my turn! That woman, my so-called mom, never gets off the darn computer. I mean, I know I don't have opposable thumbs, but these paws manage. You'd think she'd let me have my say every now and then. Well here I am, about to tell you the real story.

The past few weeks have been very, very difficult for me. First, they start bringing out boxes, which made me quite nervous. The boxes just sat there for a long time and nothing happened, so I start to relax. But every so often one of the big ones says to the other, "honey we really need to start packing", and the other one says, "Yeah, we should. Tomorrow". (You have never seen procrastinators like these people. How they ever get anything done at all is beyond me).

One day, a couple of weeks ago my mom, who you call Baila, starts to put things in boxes. She takes lots of breaks and mutters stuff under her breath. I don't quite understand what she's saying, but it doesn't sound very nice. As she's packing, I'm getting more and more panicky. This is bringing up some very bad memories.

We've been through this before.

A long time ago they started putting stuff in boxes. Then one day some people came and took everything away. Then they stuck me in my crate for 12 hours and put me a place that was really loud with no food and some ice. I was petrified. Still, I managed to hold it in for the whole trip. Really. I wasn't going to go where I sleep! A dog has got to have some standards. When they finally let me out, I found myself in a new place. There were no squirrels to chase and everyone talked funny. I was depressed for weeks, but then I realized how nice this place is. I learned the language, made some friends and I was feeling pretty good. And there are way more cats here than there were squirrels in that other place.

But now, again with the boxes. And slowly, but surely, they started to fill them up. Mom talked to me. "Ozzy," she said, "I don't want you to be surprised, so I gotta tell you we're moving. It's not like last time, we're just moving a few blocks away. There'll be some changes for you, but I think you'll like it there. I'm sure you'll see lots of cats there, too." All I really heard was "Ozzy, blah, blah, blah, blah, cats, blah, blah, blah". But I gave her that look where I look like I really understood what the heck she was talking about and she seemed satisfied.

"Ozzy", she said, "Today is the day we're moving to that new place I told you about. You're going to spend the day at Monty's and tonight Abba and I will pick you up".

I trotted into Monty's house, went over to the carpet and promptly marked my territory. I NEVER do that in a house. NEVER. But desperate times call for desperate measures. My mom was really embarrassed and apologized to Ilana a thousand times. I had her right where I wanted her!

About Monty: We have an agreement. His mom, Ilana, loves me to pieces. She is always scrinching my neck and cooing with me. I find her to be kind of hot. But everytime she does that Monty lumbers over. He's jealous and then Ilana always says, "Oh, Monty, I love you best". Annoys the hell out of me. Finally, I just told Monty that I will tolerate him but I don't have to be friends with him just because our moms are friends. He got mad and I was kind of afraid because he really is so much bigger than me. But I stood my ground and now when we see each other, which is pretty often, we just ignore each other which is just fine with me.

It was a pretty miserable day with Monty. Ilana and all the others left us alone. I ate all of Monty's food, so that made me happy. I would have peed a couple more times on the carpet but it's not worth it if noone's around to see it.

When my people came to get me, they took me to this new place. Very nice, but lots of boxes everywhere and I don't like that at all. I found a corner and lay there. My new plan was to lay there all the time and look depressed so we could go back to the other place.

That plan didn't work quite as well. We're still here. There are alot less boxes, so I'm feeling a little better. There's a field down the block where they take me to, so I get to run around and have even chased a cat or two there. (I never seem to catch them, but it's the thrill of the chase I enjoy). Up at the new house there don't seem to be that many cats, but there are lots of pigeons. We're on top of a hill and I see them fly by all the time. The other day one even flew into the house. Boy, did I have fun barking at it. Mom wasn't as thrilled about that one as I was.

I guess I'm settling into this place. Change is difficult, but it happens in life. You learn to go with the flow, if you know what I mean. It makes me a better person dog.

Uh-oh, there she comes again. She wants her computer back. I'm glad I got a little time in to tell you what's been going on here at Casa Baila. Don't worry about me, I'll be okay.

And I bet Monty never posted on anyone's blog. 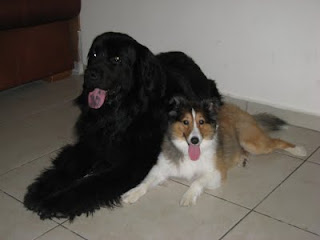 There we are looking like best buds. But you know the truth.
Posted by Baila at 12:23 PM 7 comments:

The view from here

Last week we moved from the rental we have been living in since we made Aliya to the apartment we bought here in Israel.

Isaac and I feel so blessed that we are able to own a little piece of this land of ours. As a constant reminder of our blessing, I get to look at this all the time: 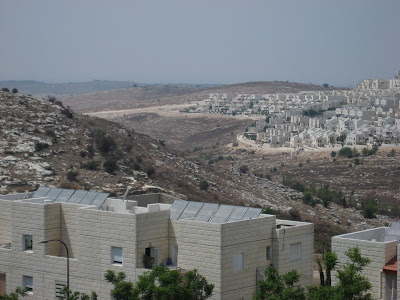 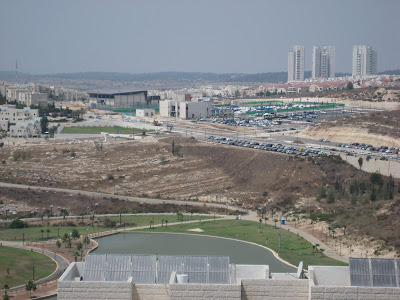 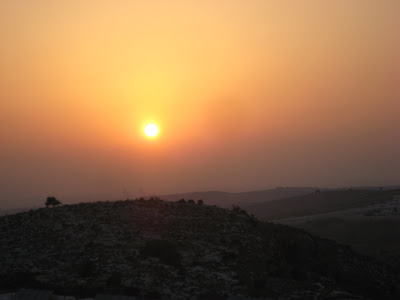 With G-d's help we look forward to making many happy memories in our new home with family, new friends and old, for a long time to come.
Posted by Baila at 8:23 AM 13 comments:

For me, the most difficult thing about making this move to Israel is leaving the people I love behind. At first it was a huge void for me, a mourning of sorts. Slowly, the void turned into a little ache that I could wrap up neatly and tuck away. Every now and then (as in true mourning I now know) the ache rises to the surface.

It could be when I see someone on the street that bears a striking resemblance to someone I miss.

It could be a wedding I missed.

It could be followed by a visit which invariably comes to an end.

Sometimes when someone from America asks me how my Aliya is going, I answer, "if you were here, it would be perfect."

You know the challenges we've had here: the cultural and linguistic difficulties, the lice, watching my kids struggle, financial issues, the heat (Oh G-d, the heat). And yet, the feeling of accomplishing something I dreamed of for so long makes me unbelievably proud. If I accomplish nothing else in my life, I will always have this.

Still, I miss my people. If they would all come here, life for me, would be as perfect as it could possibly be. Sure I joke about missing Target and good pedicures. And I would miss the places, but if the people were here, I think I'd miss them alot less.

Tomorrow, I get just a bit closer to perfect. I've known Carol and Stuart for over 25 years. You know the kind of friends they are, because I know you all have friends like this--the ones that drop everything for you before you even know you needed them to do it.

A story about Carol and me: We were both thrilled when we learned we were due with what turned out to be our youngest kids at the same time. Throughout the pregnancy we made plans as to what we were going to do when we started out maternity leave, before the babies actually arrived. We decided we would go see the first showing of Harrison Ford's new flick Air Force One. We must have also planned lunch, although I don't specifically remember that. Of course, on the first day of our leave I went into labor. I called Carol from the labor room to let her know. As soon as she picked up the phone, she suspiciously asked, "Are those beeping sounds [from one monitor or another] what I think they are? I will be very annoyed if you're canceling our date!"

Tomorrow, Stuart and Carol and their kids, Adina, Ilan, Gilad and Dafna (born three days after Orli) will step off that plane into the blazing Israeli sun. Like us, they've dreamed and talked about this day for years. Like us, they face many challenges as they settle into their lives. They will probably be dazed and exhausted. They will have days when they will have serious doubts about their decision. But like us, they have a clear vision of what they are doing and why. Tomorrow, the Katzes will have made it to the Holy Land.

And my life will be one step closer to perfect.
Posted by Baila at 7:49 AM 11 comments: