Liat is away in America. She's having a great time there, although I'm glad to hear she misses Israel.

Tali just left for camp for two weeks, after working at a "kaytana" (day camp). Now Orli's taking a two-week stint there. Orli has loads of friends in town and is busy with them and with Bnei Akiva, her youth group.

Last year, I'd get home from work, settle in a bit and we'd be off to the beach by 3 or 4 and stay there till dark.

This year my kids don't seem to need me to take them any more. They are managing on their own, thank you very much.

It's every parent's dream, huh? But I'm finding it a bit...disconcerting. Maybe even lonely.

It's not that I don't have what to do, or have my own peers who have similar schedules; it's just that--I kind of like hanging out with my girls. (Except for shopping. That drives me nuts).

HAPPY BIRTHDAY TO ORLI, WHO IS OFFICIALLY A TEENAGER TODAY!!! (Although who are we kidding, she's been behaving like one since she turned three).
Posted by Baila at 6:38 AM 7 comments:

If the recipe you're working with calls for a jalapeno pepper, DO NOT think "That doesn't look very hot", and proceed to put one of the little seeds on your tongue. Trust me on this one.

Now that we got that out of the way, here's Abuelita's Eggplant Spread.

Peel and cube the eggplant, salt it and put in a colander until it "cries"--liquid will drain out and the eggplant will be softer.

(I didn't rinse the eggplant, but I probably should have, it is a tiny drop on the salty side now).

Saute the eggplant in a bit of vegetable oil until it looks cooked. Abuelita (that's my mother-in-law) said to do it until it's "transparent", but I never could see through the eggplant, so at one point I said, "that's enough, you looked cooked".

Remove the eggplant and in the same pan saute the onion and the peppers without tasting any errant seeds.

When that's done, add the cooked eggplant, a bit of water, the tomato paste and the vinegar. Leave it on a low flame for a couple of minutes stirring frequently. (Or don't bother stirring it frequently, that's an annoying instruction).

It's a nice treat with crackers or to serve at the beginning of a meal with your chumus and other "salatim" (little salads that Israelis serve at practically every meal). 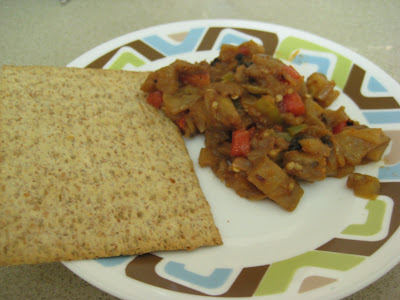 Now excuse me while I go ice my mouth.
Posted by Baila at 8:51 AM 4 comments:

A birthday, an interview and a mystery 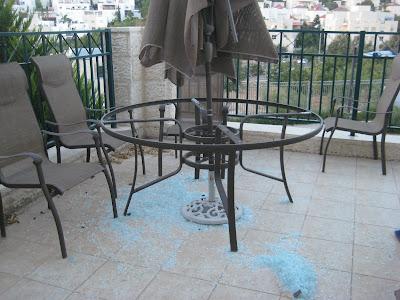 I no longer live there, but I'd be remiss in not mentioning a very special birthday. America is 234 years old today and I pray that she will continue to stay strong. I am proud to be American--living in Israel does not negate that pride.

In other news, I was interviewed by Ilana-Davita. I love her blog and she has been on my blogroll from the beginning. She is doing a series on Israeli bloggers (now why didn't I think of that?) and I was honored to be included. You can read the interview here.

Finally a weird thing happened here at Casa Baila. We were away for Shabbat and when Isaac and I returned late Saturday night, we found that the glass table on the furniture was completely shattered. 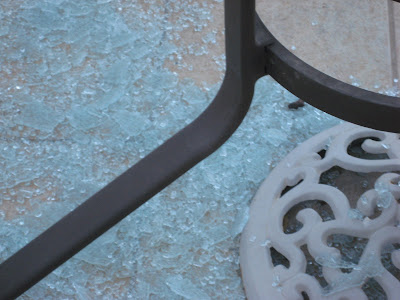 As in a gazillion pieces. Noone was home for the weekend, nothing else was disturbed, I didn't see a stone or anything near the table.

What do you think happened?

Ahh, and let me not forget--Haveil Havalim is up here. If you want to know what's happening around the Jewish blogosphere that should be your go-to place.
Posted by Baila at 1:11 PM 8 comments: