Today, a symbol of American consumerism, the Gap, had its grand opening in the Mamilla Mall. Their marketing campaign "Hello, Jerusalem", featuring those perfect babies, slightly scruffy,yet sexy men, and long-as-string-bean women has been plastered all over Israel. The Mamilla, itself a symbol of wealth and acquisition, opened about two years ago just outside the Jaffo Gate of the Old City. It originally was one of the first neighborhoods in Jerusalem to develop outside its walls, and until relatively recently was considered to be a poor part of the city. Admittedly, since the mall has opened, parking the car right outside the Gate has been a pleasure, as has the walk through the mall to the Kotel. Tourists love the Mamilla, and I assume spend lots of money there in the restaurants and stores. Still there is something about the outright materialism that bothers me. I can pretty much promise that I won't be a Gap shopper and needless to say, we ignored the big event.

Today, the girls, my sister, who is visiting from New York, and yours truly visited a Jerusalem soup kitchen to help them serve lunch. This particular branch of Meir Panim feeds about 400 people daily.

My brain was a jumble of thoughts for the two hours (which flew by) that I was there:

When we arrived at the kitchen, a line had already formed outside the locked door. I saw a worker in the kitchen and told him we were there and ready to help. He smiled and guided us through the crowd. As he unlocked the door, a woman behind me declared, in Spanish, "Who does she think she is, cutting the line?" Later on, I passed her table and asked her, in Spanish, if everything was okay. She asked if she could have some potatoes instead of rice. "Of course, with pleasure", I told her with my most charming smile. Later on, when she left, she sought me out. "Muchas gracias", she told me, and I saw an apology in her eyes.

A middle-aged man walked in, with four children; two little ones and two teen-age girls. He made sure his children received portions before he did and patiently made sure the little ones ate as much as they could. He didn't see me watching him, but the combination of weariness and love I saw in his face made me cry.

"Mommy, are you crying?" Orli doesn't ever miss a trick, does she? My kids laugh at me for being such a softy; they know I cry at movies, books, TV commercials, Dear Abby columns...Today, though, Orli understood why.

A man, who appeared to be mentally handicapped, indicated that he needed me. I came over and he told me, "Tell these women to stop!" I glanced over at the next table, where three elderly women were chatting. "THEY'RE TALKING!", he said. One of the women raised her eyebrow at me. "It's okay", I said to the women, and to the man I asked, "Would you like more chicken?" He beamed at me, held out his plate, his complaint apparently forgotten.

A Chinese woman walked in, looked at the food, and pointed to the fish. She seemed rather well dressed, with a nice pocketbook and sunglasses dangling from her shirt. As I brought her the meal, she asked, "How much?" It was a bit difficult explaining to her that this was a soup kitchen--she couldn't understand English. When she finally figured out what I was saying, she was very embarrassed. I told her it was fine, she could give a small donation when she was done. Which she did, after hurriedly finishing her meal.

The woman organizing us was a powerhouse. She knew her customers intimately. "That woman doesn't like shnitzel, give her the roasted chicken." (Later, she said to me, you and I have food preferences, why shouldn't these people have choices as well?). When a 7-foot man walked in, she instructed us to give him a double portion and to be generous if he asks for more. For a charedi man, she noted that he would eat upstairs because he doesn't want to eat in mixed company. A blind man was escorted to his seat and given personal service. When another woman walked in, I was told to give her the soft fish and mashed potatoes--without teeth it is difficult for her to chew on anything else. I noticed that as she greeted people, she touched them--a pat on the shoulder, a hug, a grasp of the hand. How often are these people touched--hugged and kissed and loved? Some of them seemed so...lonely. 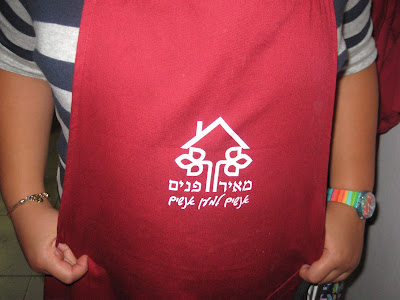 Meir Panim serves everyone; religious and not, charedim, the elderly, the young, the handicapped, the lonely. No questions are asked; if you come in you will get a nutritious meal, and you will get respect. A nutritious meal and respect. Sometimes I forget that there are people in this world who don't have these basic necesseties that I take for granted. At least for today, after being there, I thank G-d for the bounty that is my life.

If you want information about volunteering for this soup kitchen (very conveniently located by the Central Bus Station of Jerusalem), contact me via e-mail and I'll be happy to forward you the pertinent information. This is a great thing to do if you're visiting Israel, but for those of us living in Israel, the organization could really use us when the tourists go home, during the school year.

Haveil Havalim is up at Esser Agaroth.
Posted by Baila at 9:08 AM

Another great post. You haven't lived until you have worked in a soup kitchen with your children.

Kol hakavod to you! What a beautiful way to spend a day.

Last year, my son's Ra"M had his class spend a school day volunteering at Meir Panim. The boys gained so much from the experience.

Kol hakavod. This is a great mitzvah Baila. It is also great to help at the soup kitchen with your daughters. A good reminder that we are blessed while others aren't so lucky.

my eyes welled up just reading your blog, thank you.

I wanted to volunteer somewhere on my last trip to Israel... but that didn't happen. Now I really wish it would have.

Thank you so much for posting this, this is something that I'd love to do next time I'm in Jerusalem.

i would love to have the information, now that i am here!

edit: thought my email would appear, it didnt, ill try emailing you

Wonderful post. How great that you had this opportunity.

We have a food pantry in Highland Park. A friend's son wanted to know why someone from his class (he goes to public school) had to wait online to get food.

Wish the Gap were in Highland Park. Compared to some U.S. stores, it's not so upscale. Bringing money into Jerusalem is not such a bad thing. Supports the economy.

Leora, I fully agree. The Gap provides Israelis with jobs and the tourists are certainly something Israel counts on. There is just something so flagrantly materialistic about Mamilla that doesn't sit well with me, but I do understand its benefits.

what a beautiful post, you made me cry. I have donated money to meir panim in the past not really knowing what they do and if they are truly legit. thanks for letting me know my money goes to a very worthy cause.
sz

"Who is wise? He who learns from everyone."

I love the way you deal with conflict. You don't jump in, head on. You approach gently, from the side. You handled the Spanish-speaking lady and the gentleman who wanted a silent meal masterfully. I will try to learn these techniques. Kol hakavod!