Name Dropping....or How I Got to Meet the Stars of the J-Blogosphere

Spent a good part of the day reading blogs reactions to yesterday's convention. Some got pretty snarky but were kind of funny. Let's not take ourselves to seriously, guys. For me the whole thing was just a fun event. I went to meet people I knew, but yet didn't. It was an experience unlike any I had ever had before. I'm starting to think of some of these bloggers as friends. Weird.

Just a note--it wasn't like a Trekkie convention at all. Captain Kirk was nowhere to be found. 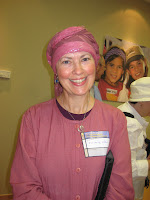 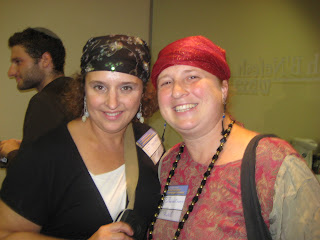 There's RivkA of Coffee and Chemo. Unfortunately most of us know someone living with cancer. RivkA really tells you what that's like in a tender, humorous way. (And that's me with her; I believe I'm "outing" myself on my blog!) 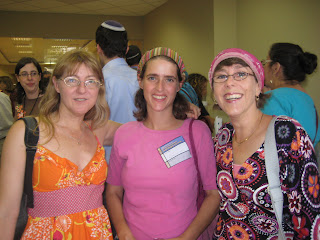 Here are Oleh Girl, Safranit, and Zehava (because behind every great man blogger is a woman saying, "You sure you want to write that?") 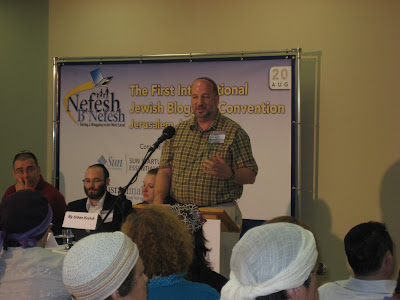 That's Trep, the only blogger who got to do both panels and sit in business class on the NBN flight. "Be nice", he said. 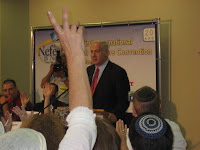 That's Bibi asking how many of us are living in Israel. Lots of raised hands. "This is your land, this is your city and it will stay your city", he said. 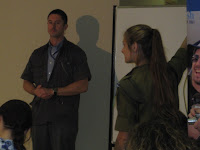 Lots of security around, especially when Bibi was there. You can always tell the security people by the curly wire behind their ears, and the dark madras shirts. It's a look I guess. The soldier girl worked for Galei Tzahal (Army Radio) and held her hand up high near the speaker for the 40 minutes that Bibi spoke (yes, he spoke that long). In general, I didn't worry about security; I noticed lots of people packing guns. And you know how I love Jews carrying weapons. 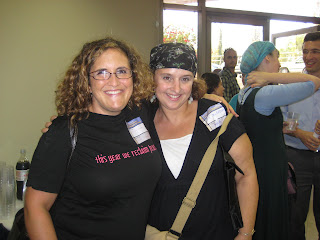 My Shrapnel's Gila. As intelligent and witty in real life as she is on the blog. "I write for me", she said, during her presentation on one of the panels. (Don't we all?)

I also met, but didn't take pictures of Batya, Mom, Baka Diary, Chayyei Sarah, Rafi G., Commenter Abbi (who brought quite a babe to the convention), Eli's mom, and Robert Avrech of Seraphic Secret (he was chatting with Trep when I went to say hello. I wanted a picture, but was totally embarrassed to ask--felt like a groupie. Oh well. Maybe next year).

I didn't get to meet West Bank Mom or Joe Settler who were there. Emah S. and RR couldn't make it and I was truly disappointed when I heard that Jack (current manager of Haveil Havalim) didn't make it after all. I hope all is well, Jack.

I was thinking of linking to every blog I read that talked about the convention, but I'm to lazy to do that. Jameel probably has one of the most comprehensive blogrolls, so if you go there you can link to all the snarky, witty commentary you want.

Overall I thought the convention was fun. The organizers did a good job and I'm sure will do even better next year. I think some bloggers, and perhaps organizers took themselves a bit to seriously. There are certain things that could be improved upon in my opinion:

1. I think most bloggers wanted more "meet and greet" time.
2. Bibi was a fun surprise, but he spoke way to long. [Is he the best we've got for Prime Minister? Sigh.] I personally wanted to hear more from the panelists, and from Frum Satire--whose comedy routine brought a chuckle or two.
3. The panelists should probably have had more direction in what they were going to speak about. It was all quite vague and general. Any tips they gave about increasing traffic were pretty basic stuff, even for a computer illiterate like me.
4. I personally would have liked to have more interaction with the bloggers who were participating via the web.
5. A waffle maker for a raffle? The only one hoping to win was Jameel (who still owes a bunch of us some waffles).
6. Food was good, but we definitely needed Russian dressing for the turkey.

This was NBN's baby, so of course they had a specific agenda, to promote Aliyah. That's okay with me. The purpose of my blog is to express myself and to write. The fact that I happened to have made Aliyah jives with NBN's agenda. For now. As far as increasing traffic by linking and promoting and blah blah blah, well that's not for me either. This is a hobby for me, not a profession. I like and want people to read the blog,but I'm not willing to spend that much time or effort to make that happen.

I have one more post about the convention, actually about a specific blogger that I met, to put up tomorrow, and then I think I will have finished beating this dead horse.

Jeez. I LOOK crazy enough to come on aliyah with teenagers. Dang, I am so enjoying your writing. Speaking of computer illiterates, I need to take a class from you (yes, we are all on different rungs of the ladder, giving a hand to someone, yada yada) regarding linking and strike outs. Too fun. Let's do coffee.

Thanks for the shout out!

Just as soon as I figure out how to tovel the darn machine, waffles will be available at Shiloh. From He-Who-Won

You're on for coffee! And its pretty funny if you want me show you how to do that stuff, but I'll be happy to pass on what I learned from other bloggers. You can send me an e-mail.

I always thought your blog name was Why me, Dad? and it was some kind of family/parenting blog. Last night I finally figured out it was your name! They don't call me swifty for nothing. Anyhow, I just now checked out your blog and I'll be sure to visit again. Thanks for stopping in, and next year, Beezrat Hashem I'll be sure to say hello (unless we get some of those waffles before....)

Baila, I love your enthusiasm! So nice to "see" you! And thanks for showing us the photos of all the various bloggers. I didn't get to watch the whole thing (so I missed you saying hello, did you really say hello to "moi"?), and then we went away all day today, so I'm finally reading your posts.

Can we get you on Twitter? I was reading Juggling Frogs Tweets during the conference and then I did a few myself...I have become a big FrumSatire fan (I wrote "Oh My God, it's FrumSatire" on my Tweet, like a teeny bopper), and Benji Lovitt is hilarious, too.

Spend more time with your family and friends,eat your favorite foods,visit the places you love wow powerleveling

love the pics. and the post. you look great!

Ironic because I wanted to get a picture with you, but was afraid you'd think I was a total dweeb.

what a great fun roundup. as one one the chat room, i seriously was wishing i was there!!!!! i would have done just what you did with the pictures:-)

I also wanted to "meet" you, but, one, I am a little too shy to come up to so many strangers at once and introduce myself, and two, I kept tripping over press people!

It was fun to see how excited you and others were.

It was loads of fun...altho I confess to feeling like a school-kid on the first day of school. Nametags, lots of new faces, total shyness, but once I started recognizing the blogroll, it got easier to say "hi!"

I also enjoyed our one-on-one talk on the way back--I'll keep reading you, but if you're up for coffee sometime, I'm just down the street until October....

The meeting people bit was the best part. I am really looking forward (especially now that I have wheels) to spending the next 12 months (until the next conference) getting to know the folks that I finally met!

You know, I have an extra broom and dustpan. Shall I bring you that? :)

Thanks a lot for the photos Baila, its really great to put faces to names.

Great round up of what happened there. It was unreal meeting so many people f2f.

Thanks for signing in for November KCC.

Thanks for the pictures! It was great to see the face behind the wit. Now I'm starting to get a voice for the words I see on the screen. And no one there looks crazy:) They look happy!

WOnderful post! I really enjoyed the pictures and your commentary!

It would have been nice to have a picture. You totally have the green light to snap next time.

BTW, your suggestions for the next J-Bloggers convention are superb.