Man Enough to Wear a Purse 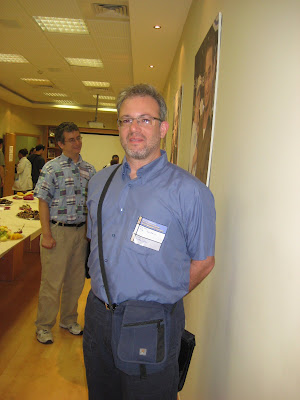 Meet QuietusLeo. (Yes, yet another blog to get addicted to). He has been an occasional commenter over here, as I have been over at his blog. I had the pleasure of meeting "Sandman", as he refers to himself, at the very end of the Blogger's Conference. It was one of the best conversations I had all night.

Sandman is an anesthesiologist who writes about his experiences at the hospital he practises, which I believe is in Be'er Sheva, where he lives. He was born here, but was raised in the states. After finishing college he came back to live here in Israel, stating he never felt at home in the states. (Forgive me, Sandman, if I messed up a little on the facts). We talked at length about the state of medicine in Israel. Doctors in this country make tiny salaries and have to supplement the base incomes with extra on-call hours and some private work. As someone who knows very well the knowledge and talent that doctors have I think this is such a shame. Israel's brightest do not run to medical school, or if they do, they often leave the country. I've gotten bills from anesthesiologists in the states. If Sandman chose to practise there, he could be living the life of Riley. And don't talk to me about how doctors in the states don't make what they used to. If you're a competent physician,chances are you are making a more than decent living. I hope that someday soon Israel wakes up and realizes that undervaluing our doctors is detrimental to us all.

Sandman made a choice in his life. He lives here because he feels comfortable living here. That's it. I don't know if he thinks about living in the states or what he could be earning there. But now he is here, caring about this country and helping to save lives. Didn't they used to call people like that "idealists"? And aren't we glad there are still people like that around?

Sandman, being very Israeli in many ways, wears that man-purse that is so popular here. A while ago, I teased him about it over at Trep's blog. I keep telling Isaac I'm going to buy him one, but he says he'll never be that Israeli. I actually agreed with Sandman when he said he was man enough to carry that purse.

As long as you don't have a lipstick in there.
Posted by Baila at 8:04 AM

Another argument against implementing socialized medicine in the U.S.

Thanks for sending us another great blogger; I plan to get addicted next week.

Yes, darn it, I am man enough to use a carry-all. And it ain't lipstick, it's lipbalm!
Thank you Baila for the kind words. I'm afraid that I talked to much...as usual.
I love to talk, which is why I went into anesthesia in the first place - I have the tools to shut people up so I have more time to talk ;)
Shabbat Shalom.

Oh, I almost forgot to mention how enjoyable it was to speak with you.
You are very charming, and yes, you can quote me on that.

Thanks for sharing. Shavua tov.

Hey, the Husband wears that kind of purse, too -- and he was raised in LA! It's an army thing, he told me--everyone gets one of these kit bags in the military, and the guys all discover how convenient purses are, and why women have been carrying them all these years, and then they start carrying them also--but only the manly military kind. No Gucci or Coach.

One thing about Israel, is that everyone has healthcare coverage. I know in our circles in the states everyone we knew had coverage, but certainly there are many Americans without insurance or with inadequate coverage.

Thank G-d, in the dealings I have had with the health care system (mostly follow-up care for Liat), I have found top-notch facilities and doctors...but its scary to think about how undervalued these dedicated professionals are. It's definitely a big problem in this country. I'm trying to learn more about it, and will probably post more about it as time goes on.

It was great meeting you in person and talking to you. I caught up a bit on your blog and saw that you are going to be a commuter to Tel Aviv. I wish you all the best with that.

Read his blog, it's fascinating!

I've never seen a soldier with one of those bags, but that's okay. I happen to think they're great--I plan on buying one for me. In LA they're probably using Gucci or Coach ones.

and he was raised in LA!

Hey I live in LA and don't know anyone who walks around with one of those.

Although, I must admit that my pockets do get rather tight with all the crap I need to carry around.