The Jewish Dog (no, not Ozzy) or three+ years in and there are still firsts for me

Those of you who know me, know that I love to read. When I was a kid, we were allowed to take out ten books at a time from the Brooklyn Public Library. My mother would take us there every Friday, so I pretty much read ten books weekly--sometimes more when I read the books my siblings took out.

As an adult I continued to read voraciously. Not ten books a week, but I used to be able to polish off two or three for sure. With the advent of Blogger, Facebook and all that other stuff, I read less books, but I read many, many articles and blog posts. I still average 2 to 3 books a month.

When we moved here to Israel, I started reading the newspaper in Hebrew and I have to say I was pretty pleased with myself about this. But I never thought I would want to read a novel in Hebrew. Reading is such a pleasure for me that I thought reading in Hebrew would slow me down. If I have to work at reading, where's the pleasure? I have plenty of sources for English books, including my book club here in Modi'in, my book sistas (including Hilary who sends us books from the US), and various other sources. Sometimes I even buy books.

But this week I was inspired to read an actual Hebrew novel. (Okay, I wasn't really inspired. What actually happened was that on Shabbat morning I was downstairs and had already read all the papers. The English book I was reading was upstairs on my night table and I was too lazy to go upstairs to get it). 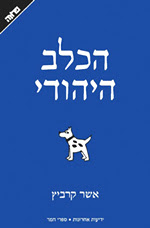 I sat down in our Archie Bunker chair and began to read the book titled "The Jewish Dog" by Arthur Kravitz. It is a holocaust story, told from the perspective of Koresh, dog of the German-Jewish Gottlieb family. From page one it grabbed me. It's fairly obvious that Kravitz parallels the holocaust experience of the Jews through Koresh. This dog goes through everything: he wanders and hides in the city, Selection, Treblinka, escape from Treblinka, is hidden by a sympathetic Pole. He even joins a partisan group. The book focuses on the dog's relationships with the humans in his life, the most important one being with his first Jewish master. The irony of the dog's humanity versus some of the animal-like behavior of the humans in the story was not lost on me.

The book was a page turner that had both humor and of course, much sadness. I had my handy-dandy Hebrew-English dictionary close by, but I only used it occasionally. There were times when I may not have understood a word, but if I understood the sentence I let it go, because I didn't want to lose the flow of the story to often. I looked up words only when I felt I wasn't getting it, which was rare.

I learned something from the experience. A good story is a good story in any language. I fell in love with the title character of the book. I've always been an avid reader of holocaust literature, and well, you know how I feel about dogs. So the book was for me, a perfect introduction into reading a full-fledged adult novel in Hebrew.

Being lazy inspired really pays off.
Posted by Baila at 9:35 AM

I bought one at sefer hashavua last year, but I cannot imagine actually reading it. My Hebrew seems to be getting worse instead of better.

I have been here 23 years and read a total of 4 Hebrew novels. I am proud of myself and even prouder of you!

As always, you inspire me!

Wow, in re-reading this I noticed quite a few typos and apologize. That's what happens when you hit publish when you're half asleep.

I know that feeling of feeling like you're hebrew is getting worse. It's actually a positive sign, I think. You're vocab and understanding have grown and now the expressive part has to catch up. It will, you'll see.

Yes, I don't anticipate that this will be something I'll do often. But I'm glad to know that it's a possibility.

Thank you, my dear.

Pigs will fly before I can even fantasize about such a feat. Kol hakavod!

Are pigs even allowed to fly in this country? :-)