Four years ago, Liat was recovering from a severe infection and was just moved to a regular bed from the Pediatric Intensive Care Unit. Every morning nurses or doctors would come around to take blood and Liat quickly became an advocate for herself, not allowing just anyone to stick a needle in her.

One morning a young doctor cheerfully walked in and introduced himself. "Hi, I'm Osama", he said. (The doctors in the pediatric unit tended to introduce themselves by their first names, probably as per some memo from the higher-ups).

"Yes, I'm here to take some blood.", he answered, reaching for her hand.

"Are you a resident?" she asked.

"I don't let residents take my blood", she said. "I prefer for the ICU nurses to do it, when they can".

He looked at me and I shrugged.

When he was gone, Liat said to me, "I hope he doesn't think I didn't want him to take my blood because of his name".

"Although", she added, "it is an unfortunate name".

Osama, as a name, will go down in the annals of history with that other name that personifies evil, Adolf, moniker of both Hitler and Eichmann.

I'm glad he's dead. I'm glad they dumped his body into the ocean and didn't bury him somewhere where the loonies of the world can go visit his grave.

But I'm not so sure his death brings closure to the families of his thousands of victims. They still live with the gaping hole Osama left in their lives.

At Ground Zero, yesterday there was dancing and celebrating. At the 9/11 memorial site someone had placed a sign.**

"Freedom, hope, peace, USA", it said. Written on the sign's side, someone added,

"Wish you were here". 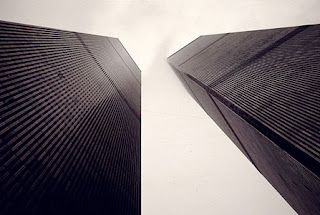 Just today I was at a pharmacy in Jerusalem and one of the Pharmacist name tags said Osama on it. I kinda got a chill down my spine and at the same time I wondered if he is happy with his name or if maybe he would want to change it.

I have a relative named Adolf, born before Hitler came to power. He doesn't seem to mind it.

I also have, or had and Adolf in the family--it was a popular name in Germany at the time. But I would venture to guess not so much today.

I'm just impressed at Liat's early ability to self-advocate. Does she give classes? And is the weather nice enough for our annual cup of coffee?

Ruti I helped her with that. I told her that she doesn't have to agree with everything the doctors or nurses tell her, that she has the right to ask questions, to make them wait until her parents or other relative is with her, should she happen to be alone. She picked that up very quickly, Thank G-d.

I'm also impressed.
when my elder son was 9 he was hit by a small truch and hospitalized. The dr would ask me how he felt. I told the dr to ask him, so he did. I did not like the attitude of the dr.