I was going to put up a quick post about the J-Bloggers Convention, but came home to the news that Assaf Ramon was killed earlier today in an Israeli Air Force F16 Air Crash. Assaf was the son of Astronaut Ilan Ramon, the first Israeli in space, who was killed, along with the rest of the crew, in February, 2003 on board the Columbia Space Shuttle.

Suddenly I don't feel like talking about how much fun the convention was.

Suddenly I just wish there was a way to erase the pain the Ramon family must be feeling.

You know when something really, really bad happens, some sort of tragedy, you might start believing, "Well, now I'm safe. I've paid my dues already. My kids have paid their dues. It'll be okay now". I wonder if Rona Ramon thought this when her son Assaf announced he wanted to follow in his father's footsteps and be a fighter pilot for the Israeli Air Force.

Prime Minister Netanyahu said, "It is rare that a private tragedy pierces the heart of the nation with such strength. Today we all grieve the death of Assaf, who fell from the heavens like his father Ilan. There is no comfort, only tears.”

It is indeed a very sad night here in Israel. 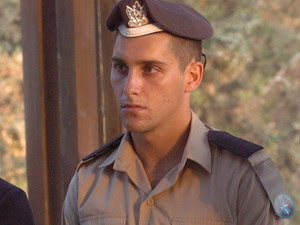 (Picture courtesy of the Muqata)
Posted by Baila at 1:55 PM

I was going to blog it -- but you said it with all the tenderness I felt. Thank you, Baila. May we share good news...

I have been thinking about this for hours now. I feel terrible about it.

Oh, my God. I hadn't heard this news. What a horrible tragedy.

Such a sad, sad day for our nation, and such a tragically personal nightmare from which the Ramon family will never awake.

Such a brave family. So sad. Beyond words.

This was quite a week for crappy news. And it's only Monday. :(

It is all very sad.