Venezuela, Venezuela on my mind

This is what happened in Venezuela this past Friday night: 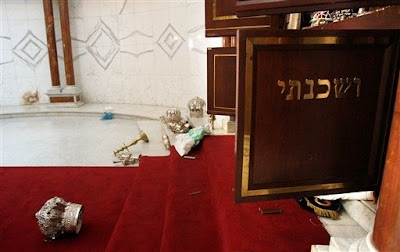 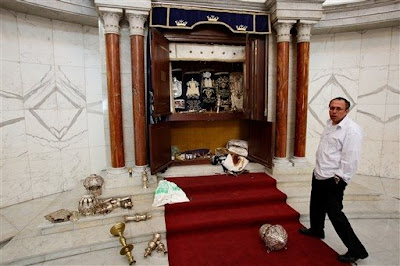 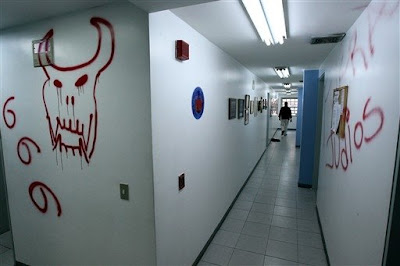 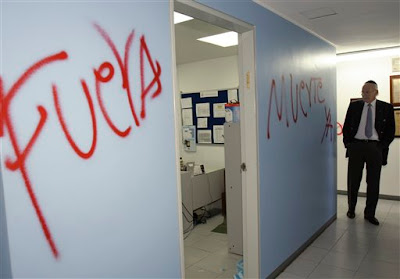 Those of you who know me know that my husband, Isaac, was raised in Venezuela. He often describes to me an idyllic childhood: family and friends, involvement in his synagogue and Bnei Akiva, all in a beautiful and prosperous country where Jews were treated with respect and equality.

Venezuela is not that country any more and has not been for a long time. This is mostly due to government mismanagement and corruption. Venezuela's current president, Hugo Chavez, is a dictator who has all but closed down free speech, taken control of private industry and fostered an environment of anti-semitism, of course in the guise of Israel-as-occupier-committer-of-war-crimes-oppressor.

Approximately 15,000 Jews remain in Venezuela out of about 30,000 Jews living there ten years ago. Most of these Jews have gone to the United States; a few have come to Israel. Amongst the Jews remaining are Isaac's sister and brother-in-law and our three nephews, who have no immediate plans to leave the country.

Isaac has always been disappointed at how things have developed in Venezuela, but I think that seeing those pictures must be downright painful for him. The man in the second picture was Isaac's "chanich" [camper--for lack of a better word] in Bnei Akiva and is now president of the vandalized synagogue. When I see a synagogue being vandalized, I feel outrage. Isaac, I think, feels despair, knowing this is happening to people he feels a bond with in a place he once loved.

The refrain of an old Israeli song went like this:

It is sad to watch the place you once called home become a place to fear. And so I say to family, to friends, to fellow-Jews: Leave. Come to Israel if you can, but if you can't, go somewhere else. I don't think the Jewish community can survive in Venezuela, let alone thrive. Get out now.

i think "chilling" sums it up well.

I forgot that your husband is from Venezuela. Thanks. I want to do a blog post, but it will just have links (because what do I know other than what I read in an article on this topic). I'll link to yours.

How hard is it to leave?

If they can't come to Israel (or would rather be capitalists), they can pile into Florida like the Cubans and many French Jews.

In the end, all roads lead to Israel. There is no other place. History has shown us that, eventually, we will be hated and thrown out, no matter how good some place seems at the time. If we don't make sure that Israel flourishes and is strong, we will never be safe.

That is so horrible.
RivkA is totally right, unfortunately.
I hope that Isaac's sister and her family choose to join you in Israel soon.

I know how hard it is to leave; and I left America for positive reasons, not because I felt afraid. I don't want to judge people for not leaving, but I am afraid for them. Hugo Chavez is a Jew-hater. Nothing else. He has been filmed and quoted as calling Jews Christ-killers and stealing everyone's money. His best friend is the biggest Jew-hater in the world, Ahmanijad of Iran.

And thousands of Venezuelan Jews have already moved to Florida. Many are concentrated in the area of Ventura.

I hear what you're saying about history and our people. And I totally agree about Israel staying strong (now more than ever). But not everyone wants to, or can, live here and that's fine. But Venezuela is just not the place for a Jew to live in freedom right now.

I hope they decide to move, but I don't believe Israel would be their first choice, for a variety of reasons.

While you can.
May they all be granted the strength to leave and the understanding that it's imperative that they do so.

Finally, I got a chance to read your comments.

Thanks for responding to these comments and to others. You have a lot of insight to their situation. May your husband's family have the strength to make good choices.

This is horrific. When I see something like this, I just want to cauterize the world.

Justice needs to be done.

There is no other homeland for the Jews than Israel. This can, and unfortunately will, happen elsewhere...

This is horrible. Anything we can do to help?

Nothing useful to add to the comments. Just let your husband know that we are praying for his family, and all our holy Yidden, to come Home as soon as they can. RivkA is right, I think. Divided we fall...