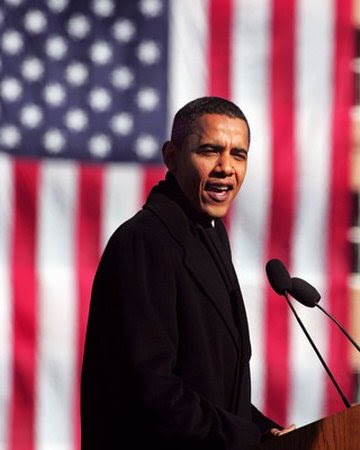 So we now have a 44th president of the United States. Of course this is a historic moment, as is being pointed out everywhere. It's a big deal to have a black president, and Barack is indeed a charismatic person. He probably has a chance at being a great president. Time will tell.

I'm about to say something extremely unpopular. I'll say it quickly and then I'm going to hide somewhere until it's safe to come out again, maybe in a couple of weeks. I know it has become very cool to totally trash President Bush, even amongst the people who once supported him.

Say what you will, but I personally believe this: this was a man who always stood by his convictions. He believed in what he was doing and in a strong America.


May America stay strong under Obama's watch. I wish him success.

But now for what's really important:

Which designer is Michelle wearing to the inaugural ball?

Thanks! Thanks, really, cause I started believing I am the only one thinking that way...

"The president wore white tie, while Michelle shimmered in a white, one-shouldered, floor-length gown. It was embellished from top to bottom with white floral details and made by designer Jason Wu."

I don't think that standing by your convictions is a good thing if those convictions are somehow wrong or immoral or harmful. (Don't forget- Hamas believes strongly in what it is doing. That doesn't make it right.) I think that George Bush always intended to do the right thing for America. But intentions don't count for much when your actions are shortsighted and harmful.

I heard a commentator say something interesting about Bush in reflection on his last few days in office. He explained that while the rest of us have "moved on" from 9/11, he never has. That in truth, Bush and his administration operated every day like it was 9/12/01...which actually explained a lot to me about many of the decisions. None of this makes me like him and his administration and his 8 years any better but perhaps gives me a different insight.

They're awfully unbalanced about Israel but NPR has some great reporting about other stuff...

As for fashion sense in a first lady, well, she should be wearing Trixie & Jane, of course!
Love,
Arlene

I hear you. I'm going to miss Bush- I think he really understood the evil out there and honestly did his best to try and fight it. I hope future generations will look upon him more favorably than this one. I'm not happy that Obama won- there are so many things wrong with him, any one of which would have disqualified any other candidate- but, like you, I wish him good luck and hope he can do some good in this crazy world.

I'm going to take a deep breath and respond to comments:

I guess there are at least two of us (well, three if you read RR's comment).

I've already had my people contact Jason Wu's people. I'm sure my gown will shimmer too.

Is it really fair to compare Bush's convictions to those of Hamas. Girlfriend, I think this is an area where we'll have to agree to disagree.

The thing is, if he didn't act like every day was September 12, would America have stayed as safe? There are many, many evil people out there who want another 9/11, and worse. Don't you think America must stay vigilant?

The first lady would look tres chic in Trixie and Jane!,

I have to admit, I kind of like Obama. I have mixed feelings, but I'm willing to give him a chance. I hope he does become a great leader, for all our sakes.

Baila-
I should have phrased my comment more carefully. Of course I'm not comparing George Bush to Hamas. I was just trying to point out that Bush has repeatedly answered criticism by saying "I made tough decisions". Yes, he has been very decisive. But it is important to review the consequences of your decisions over time, and if necessary, change those decisions. Sticking to a course of action just for the sake of consistency is not good leadership. Good leadership requires flexibility and introspection, neither of which Pres. Bush has displayed.

One nice thing about going on vacation during the inauguration was I could avoid most of the blog posts about it.

I liked Bush, as did my husband. I can't say I'll miss him as President, but I am happy that he recognized a terrorist. I don't want the Gitmo folks in the U.S.

So that's where you were! I should have guessed. Hope you had fun.

George W. Bush is a PATRIOT!!!!!!He kept America SAFE!!!!!! After the horrible TERRORIST ATACK on USA soil, if it wasn't for him and his courage to make difficult decisions perhaps USA will be suffering from suicide bombers epidemic all over the country. Let’s remember that the previous administration (Clinton) reduced the intelligence budget and reduced their power of intervention, let’s also remember that during Clinton’s administration our Navy was attacked and our embassies blown by fanatic terrorist. Nobody knows how many terrorist plots were averted because of the fact that him and his understanding of evil!!!! fanatic misguided lunatics.
Believe me, I know the economy isn’t doing great this days but please remember that what happened in Wall Street and in the housing market wasn’t caused solely by his administration, may I remind you that in 1989 the Dow crash, Bush wasn’t the president then, in 1997 (The October 27, 1997 mini-crash) the 2000 “.com” debacle happened Bush wasn’t president at that time, we did it to ourselves because we believed in fantasy sold to us by unscrupulous peers that feed in our greed to acquire easily wealth.
Somewhere in cyber space I read not too long ago the following analogy to the current Wall Street situation:
“A man goes to a very poor village (some of them to choose from in our planet) and offered $15 for each monkey the villagers bring to him…. Everybody started catching monkeys.. (Sorry PETA it is just a story no offense to the monkeys) and bringing them to the stranger… after a few weeks the monkeys started to be scars and several villagers lost interest on catching monkeys… although the stranger had plenty of those…. He then offered $20 per monkey and the villagers started to gather monkeys again…. Now this is a short post so let’s cut to the chase the price went to $30, $35, $40. At some point the stranger tells the villagers he will pay $100 per monkey knowing that there were very few left, but he needed to fly somewhere for a week and that his assistant will be paying for the monkeys…. Once he was gone the assistant went to the villagers and tells them since there are no more monkeys left he will sell them the monkeys for $20 a piece, and the villagers will be able sell them back to the stranger for $100 when he comes back…. The villagers saw the opportunity of their life time to make $$$$$$ profit and all took the deal….. The following morning the assistant was gone, the foreigner never went back ….perhaps is now in a country with no extradition … Ah the villagers they have plenty of monkeys…… very expensive ones!!!!! Ciao villagers….. We all got F….”
Let’s face it USA has now a Muslim president and he is kissing the Arab butts, is Hussein Obama going to offer political asylum to the Guantanamo Bay murderers? I can guarantee you the Guantanamo detainees were not at work or studying and there is a reason why they are there.
MAY AMERICA BE SAFE and ..MAY ALL OF US stay safe……………
....GB