Please, G-d, help them find him before it's to late

Apparently a rumor went around this afternoon that Gilad Shalit has been found. To everyone's sorrow it was indeed just a rumor.

There is talk of a cease-fire. I pray that Israel negotiates that with strength, and doesn't accept some ridiculous deal because of world pressure and anti-semitism. And I hope that one of the provisions is the release of Gilad. 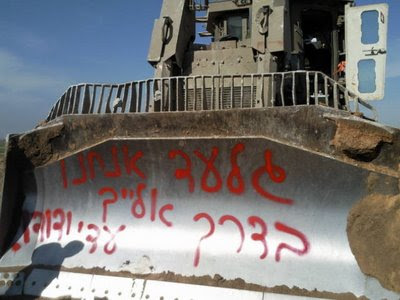 This graffiti was sprawled on a giant-armored tractor called a "D9". Their job is to go in and clear the path for the incoming troops. Translation: Gilad, we are on our way to you ([from] Adi and Dudu). (I got this from Jameel, who got it from Rafi G.'s Life in Israel).

May Gilad and all our other soldiers in captivity be brought home swiftly and safely!

She wrote: I posted a ReTweet of Rafi's post this morning (he is just learning Twitter), and I got this tweet in return:
"so the israeli soldiers want to rescue ONE dead soldier so they kill 300 kids? #gaza".

I know this is preaching to the chior, but (duh) Israel did not send in the IDF to rescue Gilad. It is ludicrous to even think that. Do I need to even say this? The IDF went into Gaza because for the past eight years Hamas has been lobbing missiles into Israel, killing and maiming, and terrorizing our Southern cities. That the world thinks that we do not have the right to defend and protect ourselves boggles the mind. And guess what world? You're just going to have live with that, much as it irritates you.

I doubt that rescuing Gilad was a primary military objective (although if he was MY father, husband or son, I'd want it to be), but while our soldiers are there, you can bet they are thinking of him and hoping to find him. Maybe some are even actively looking for him.

And that would be okeey-dokeey with me.
Posted by Baila at 10:10 AM

He has such a youthful, kind face.

I posted a ReTweet of Rafi's post this morning (he is just learning Twitter), and I got this tweet in return:
"so the israeli soldiers want to rescue ONE dead soldier so they kill 300 kids? #gaza"

I chose not to reply. It's Twitter, people post tons of nasty stuff. And a lot more good stuff.

But I think if I had replied, it might have been something like:
"yes, 1 soldier, and the mental stability and well-being of the children of Sderot, Beersheva, Ashkelon, Ashdod, Gan Yavne, Yavne..."