Those of you who know me, or have been reading for a while know about Ozzy, our wonder dog. What you may not be aware of is how Ozzy came to be a part of the family.

It was a dark and stormy nightIsaac and the girls always wanted a dog, but I resisted. It wasn't that I didn't like dogs on principle; I just knew that the girls would be to young to care for a dog and with Isaac's long work hours, the responsibility would fall on me. I didn't want to be forced to run home to walk the dog or to clean up after it's mess at home. So I firmly said no, time after time. I did agree, though to dogsit for some friends; I thought this was a nice compromise, where the girls would get the experience of having a pet and I knew said pet would be going home shortly.

All was well, I thought.

But it wasn't good enough for them.

They -- all of them, the three girls and my husband, did not stop asking, cajoling, needling, begging, demanding, beseeching me for a dog of their own.

Still I said no.

And then, in November, 2005 when Liat was diagnosed with her Hodgkin's, of course the issue was resolved. There was no way we were bringing a new pet into a house where someone was undergoing chemotherapy.

Several months went by, and thankfully, Liat's treatment went as expected. After chemotherapy, she began a course of radiation.

And during that time the pleading started up full force again. "No way", I said. I was exhausted and traumatized after our experience with childhood cancer. I didn't have the strength to even think about it.

But Liat didn't give up. She got on the internet and researched different breeds of dogs. She decided she wanted a westie and kept on telling me how good they were with children and whatever other things the breed had going for it. I paid her no attention.

The last day of Liat's radiation treatment came and of course we were all excited about it. Isaac was taking the day off to accompany her to the treatment. As was customary, he called me as soon as it was over to let me know it went okay, and to let me know they were on their way home.

"Hah hah", I snickered. "Sure. Knock yourself out."

When I got home from work, Nadine's car wasn't in the driveway. "Strange", I thought. "Where could they be?" Liat was exhausted from the radiation and needed to be home resting. A few minutes later, Isaac and Liat pulled up in the borrowed car.

Liat walked in with a huge smile on her face, followed by Isaac, who looked like he was coming home from the hospital holding a newborn wrapped in a blankie. He was beaming even more than Liat.

"What the--?", I said. When I peaked in the blanket, I saw a snout and two [sweet] brown eyes looking up at me.

"Very funny", I murmured. "You took the neighbor's dog to play a trick on me. I'm laughing inside. Now take it back."

"No, honey, it's not a neighbor's dog, he's ours. Meet the newest member of our family." And he showed me the receipt from the pet store he had bought (which was, by the way, way more than we could afford).

I put my face in my hands. What had he done? I felt Liat looking at me, expectantly. "I can't do this, Isaac. Take it back. Take it back before Tali and Orli get home and fall in love. TAKE IT BACK!!!"

Liat started to cry. "Abba", she said. "You said Mommy wouldn't be mad. Let's take it back."

I left them and walked into the kitchen. I was angry, upset. What now? I heard Tali and Orli walking in, their squeals of delight washing over me.

I felt myself weakening.

Isaac walked into the kitchen.

"Please", he said. "This family has been through so much the past few months. Don't you think a dog would help the girls? He will add so much to this family."

I was gone. Totally manipulated. How do you say no to a child with cancer? To her sisters who could not help but feel like they were taking a backseat, much as we tried to pay attention to them? To a husband who had been a rock throughout it all?

"And if he gets sick, we will not pay one red nickel for medical bills for him", I added.

Isaac didn't answer that. But he was smiling, and tearing up at the same time.

In the living room, the kids whooped it up. They had heard it all, and knew victory was theirs.

Yesterday, we celebrated four years since that day. Four years of recovery, of growing up and moving on, of a gratitude that I feel every day.

I can honestly say that Isaac was wrong. I have walked Ozzy, cleaned up after him, ran home to be there in time for him. That dog has chewed up my good leather gloves, several pairs of swimming goggles, eaten stuff out of the garbage can and ripped our leather sofa to shreds.

But for the most part, Isaac was right. Ozzy has been so good for us. He is always there for us. He has healed us. He loves us.

And I say this unapologetically: I love him, too. 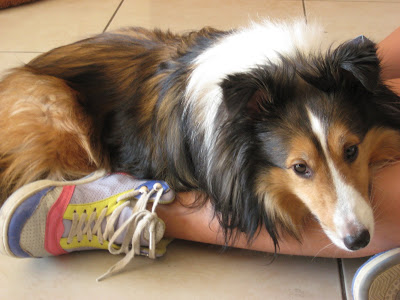 Nope, not a Westie, but a Shetland Sheepdog. Liat fell in love with him as soon as she saw him.
Posted by Baila at 9:06 AM

And he is such a cutie, btw. Some Wednesday when we're stuck in Buchman (Miss M has a chug), can AM & I come over and visit?

Oy, this is such a timely post for me. I'm struggling with whether or not to get a dog. I just can't see it happening...

Awesome post. Sorry, we're going to have to schedule an Ozzy chug for my kids too because my oldest and youngest love dogs (tehila notsomuch) and I too have no koach for a dog right now. Maybe now that we have a garden...

you forgot to mentioned what happen to Ozzy after you agreed to keep him..... Yup he took a bullet for the team!!!! way to go Ozzy and i will be eternally thankful to you

I can clearly identify with you on thi sone Baila. I love our dog, never thought this would happen to me. :-)
Happy anniversary Ozzy!

This post made me cry... My Poofy... well, he also showed up when he was needed. Dogs are amazing. They're a ton of work, but they're incredible. They really make your life better.

Other than your daughter having cancer (which I realize is a big other), that is a beautiful story. You didn't stand a chance; you were clearly outnumbered. ;-) Dogs do require a lot of effort, but they offer so much in return. I get weary of caring for ours, and being tied down by them, but I wouldn't take for them.

Man, I remember that like it was yesterday! Isaac walked him over to us and told me he surprised you with the dog. I said, "you what?!"
Where does the time go?
Love you guys,
Arlene

I can't believe I am so weepy over Ozzie. I love that dog.
CK
P.S. but MY family CANNOT have a dog!

I love that story, it still makes me cry. I will not let my kids read it, i' with CK no dog! They can't manage to hang up their robe after a shower, walk a dog... not! May Ozi continue to give you much joy and nachat for many years to come.
SZ

Oh, Shelties. I got my mom one after one of her other dogs met her tragic death. She told me time and time again she didn't want another dog but... the moment she say the little 7 pound ball of fur, she melted. He is now officially the greatest thing that ever happened to our family...

Ozzy is adorable. Happy Anniversary to all of you.