If you live in Modi'in, you may want to lock your doors. Just for tonight.

Well, Isaac sure has been a happy camper. A few months after we moved here, there was a call for citizens of Modiin to join the "Mishmar Ezrachi". Literal translation: "Citizen's Watch", or volunteer police force. This stuff is right up my husband's ally. He went to a course (which included target practise) and once a month goes out with his partner ("Starsky") for four hours of patrol or checking cars at roadblocks. He carries a gun, which is a bit scary for me (especially since the [real] police officer handing it to him for the first time said, "You see this gun? You better not use it.").

Anyway, Isaac, always Mr. Friendly and Popular (I swear the man could talk to a tree; and the tree would answer him) was asked to be in charge of coordinating this program. He was so happy about it; I burst his bubble by telling him this was one of those pain-in-the-butt jobs, where he will schedule people and they will call to cancel and he'll have to scramble to find a replacement. Which is exactly what has been happening, but Isaac doesn't seem to mind. He gets to go to lots of target practises, and he got this very cool uniform: 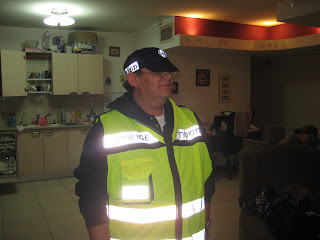 Anyway, Starsky and Hutch are out on patrol tonight, protecting Gotham City from the forces of evil. Although I laugh, they take their job pretty seriously, and I really am proud of Isaac for becoming involved in this.

He always did want to be a policeman when he grew up.

Local elections were held yesterday. I am ashamed to say I did not vote, really because I had no idea what any of the candidates were all about. I should have made it my business to find out, but I've just been to overwhelmed with the logistics of life and family lately.

A guy named Chaim Beebis won and will be Modiin's mayor for the next four [I think] years. Maybe he'll choose a deputy mayor by the name of Butthead and then we'll have Beebis and Butthead running the city. [Bah dum pum!--but I can't take credit for that, it came from my friend AB].

Although, I know nothing about the guys running for mayor in my city, I did follow the mayoral election in Jerusalem and am very pleased that Nir Barkat won. Good news for our capital.

Finally, I'm sure you all know that Israel will be having national elections in February, and I will be sure to vote then. Unfortunately, the choices are not exactly overwhelming, but I just had a brilliant idea: maybe John McCain could come here and run for Prime Minister! He'd be a shoo-in!

I'm feeling my brain becoming incoherent, so I'll sign off. But not before I mention that Haveil Havalim 190 is up and running. It's hosted by Jewlicious, which is quite a nice blog. Have fun reading.

I need sunglasses to look at that photo of Isaac.

Wait 'til I post a picture of my diamonds.

I loved this post! a real slice of life.

In the "old days," the guards here would walk around the neighborhoods doubling as babysitters, since there were few kids old enough to work in the profession. My eldest had almost a monopoly at one point.

Well, if there was a yishuv party, the guards would check on crying babies, too.

dear "anonymous" - you didn't say where YOU live (maybe not in Modi'in) Think about it...
(and while you're doing so, follow my link -please!!)

Is he wearing a flak vest?

Starsky and Hutch. You're dating yourself. ;)

But when you come visit Modiin, you can be confident S & H will make sure you're safe.

I checked your blog--like it!

Hmmm. It's not bulletproof, if that's what you mean.

I'm talking about the 2004 movie starring Ben Stiller and Owen Wilson. What exactly are you referring to? ;)

so why didn't you leave a comment (even a rude one)?

JdJ: He's wearing a reflective vest, not a flak vest, flak jacket, or bullet proof vest. You also have to have a similar one in your car -- its a CRIME to exit your car if you stop on the road for any reason (accident, mechanical failure, out of gas) and not put on a reflective vest.

Baila: I can't believe you didnt vote...you're here - help be a part of what happens!