These pictures are NOT for the weak of heart...

With the recent warm weather, we had been told that it was time for Ozzy to get a haircut. He did seem to suffer during the Pesach heatwave, and we are also concerned about fleas and tics. So we decided to have him trimmed a bit. But we NEVER expected this.

Here's the before picture, the Ozzy we all know and love: 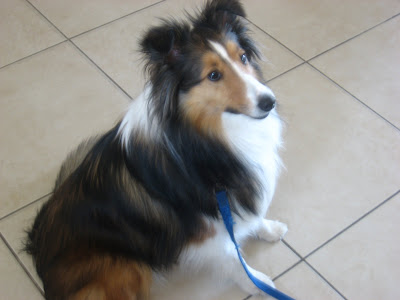 (How do all the Israeli kids know about "Lassie"? They (and adults as well!) always say, Look, a Lassie dog! In fact, Ozzy happens to be a Shetland Sheepdog, not a collie, which is Lassie's breed. At least he was a Shetland Sheepdog. We're not quite sure what he is now.)

Here is how poor Ozzy looks now, after his, uhm, trim: 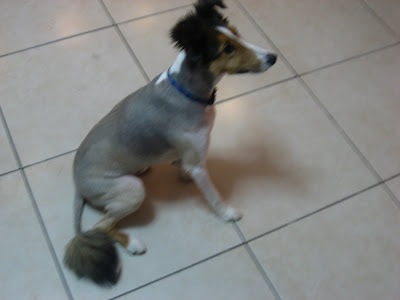 When I went to pick him up, I didn't see him with the other dogs, because I just plain did not recognize him. Then I saw him. When Liat and Orli heard my [very loud] gasp, they ran over to look and then burst into hysterical, uncontrollable laughter. You know the kind of laughter where you have to clutch at your stomach and the tears are streaming down your face. That kind. The groomer told them to stop because they were making Ozzy feel bad. They just couldn't. Then the groomer said, "Now you're making me feel bad." Which she should, after doing this to poor Ozzy. Did you see the tail she made him? There is only one word to describe it, but I can't do it here, because I've seen my girls sneak a peak at the blog from time to time.

I kinda suspected that the groomer had taken our Ozzy and replaced him with THIS. She had told me she had loved her Shetland Sheepdog years ago, and had never had a better dog than him. There aren't to many Shelties here in Israel, so it was entirely possible that she would do something so nefarious. But when we came home, this dog behaved just as Ozzy does (chasing buses and birds, giving us a high-five, and playing soccer.) So it probably is really him.

At home, Tali burst into tears when she saw him, and Isaac, well he had a few choice words. At least [the dog] won't be hot. I just hope his friends don't laugh at him as hard as we did.

Perhaps you noticed that Ozzy looks much skinnier with his new [lack of] hair-do.

Excuse me while I go shave.
Posted by Baila at 6:00 PM

He won't be hot, but you might need to put sunscreen on him. Keep telling him it will grow back!

And yes, it will grow back.....hopefully sooner rather than later! Remind me to ask you for the name of that groomer if we ever get to the point of needing a groomer with our pup!

HANG IN THERE OZZY!

"...and then burst into hysterical, uncontrollable laughter. You know the kind of laughter where you have to clutch at your stomach and the tears are streaming down your face. That kind.

Can. Not. Stop. Laughing at the picture.

(Poor little fella! sort of resembles a cartoon character more than a dog at the moment, huh?!)

i bet ozzie feels great with his new haircut..a good buzz cut can be liberating! smiles..hang in there..bet ozzie has the last laugh:)

Oooh, I got a good laugh out of that pic! I wonder if this is an "Israeli" thing because our neighbor's dog came back from the groomer's a few weeks ago with the exact same "do." Right down to the fluffy tail.

Ozzie will certainly be cooler this summer!

That's so sad (and hysterically funny at the same time). I think Ozzy is blushing.

Don't let him by a mirror. He will be traumatized.

You think I'm letting him be seen in public like this? Sunscreen is NOT necessary!

Thanks for your kind words.

The thing is, its like a car accident. You want to, but you just can't look away.

When was the last time YOU had a bad haircut?

Israeli? The groomer is British.

Which Chedva? The Chedva I know told me she's to busy to read my blog.

Him traumatized?? What about me???

We are contacting the PETA people right away.