When I was a child, I was afraid of dogs. In Williamsburg, Brooklyn, where I grew up, there were many strays, and Mazi (my constant companion) and I would say a special pasuk whenever we saw one of these dogs, feeling confident that it would protect us from harm. (I remember the pasuk, but am not sure its right, so I won't repeat it here, until I can find it). Still I was once charged by a stray dog (don't remember if I had the chance to say the pasuk or not) and this traumatized me. It was many years before I realized the difference between a stray, and a dog owned and loved by a human.

I never thought I would actually own a dog. In the early days, very few orthodox people owned dogs, and in Chassidish Wiliamsburg especially. To this day I am wary of dogs not on a leash (you really don't see to many strays around these days). But my arm was twisted and Isaac brought our sheltie, Ozzy, home at a time when our family really needed it. Ozzy has become part of the fabric of our family. Sometimes I wonder how I can feel so much for an animal, but the truth is, he gives us so much. If you are not the owner of a pet it's hard to understand this--I never did before Ozzy came into our lives. But people who own pets know what that unconditional love for you feels like, and how it can unite and heal a family in so many ways.

This morning I woke up early determined not to have a stressful Friday getting ready for Shabbat. Just after I put the potato kugel in the oven I heard a boom and a women shrieking. I went out on the mirpeset and saw her standing with her dog. I called out to her and asked if she needed something, and she screamed, "please a cell phone!" I ran inside, threw on something over my pajamas, grabbed the phone and clicked on Dr. Arik, our vet, as I ran outside to her. By this time, her dog, a white lab, was laying on its side. I gave the woman the phone. As she called the vet, I leaned over the dog, and was shocked as I watched life leave this beautiful creature. I had never seen anything like this. One split second, and dog went from breathing to not. I knew immediately that calling the vet was useless. The woman's back was turned to the dog. Dr. Arik did not answer the phone and she grunted in frustration. She then called her husband and told him to come quickly. She handed me the phone and and then looked down at her dog. I closed my eyes because I did not want to see her heart break. She bent down, and she knew. It was impossible not to. The women dropped her face into her hands and began to sob. I was speechless, and in tears myself. "I'm sorry", she said, "I know it's only a dog". "No", I whispered. "I have a dog. I know what this means." She slumped down and and asked me, "What will I tell my children?" I couldn't answer her. Then, "Thank you. You don't have to stay, my husband will be here soon." I didn't say anything, but of course, I wasn't going to leave her there alone. A few minutes later her husband pulled up. He looked at the dog, and at his wife and sighed. He tried to console her, but she was in to much pain.

I went back home, and watched from the window as her husband emptied the trunk of the car, and then wrapped the dog in a sheet and put him inside.

As the car pulled away, I wondered at the capacity of humans to love animals, and was thankful that I have learned to open my heart and let Ozzy in.

Ozzy looked up at me, tail wagging, waiting expectantly for some attention.

And I gave it to him. 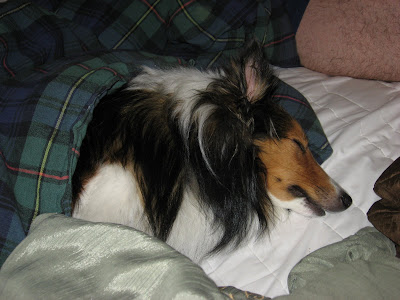 I have tears in my eyes Baila. We too have a beloved doggy named Katie. We got her from the humane society when we were DEAD BROKE..crazy right? Well she has brought such joy to our family and my love for her is the same as for my children...she is my third daughter..sweet little katie.

I had to laugh when I saw your post this evening. After years of saying no, I finally relented and yesterday we went to a shelter to look at dogs. We ended up paying a nominal fee to purchase a 2 week old lab-shepherd puppy. I spent all of Shabbat walking around thinking "what have I done." Reading your post made me think it won't be long until I wonder why I said no for so long.

Stephanie--I know its crazy how you can feel so much for a dog, right?

R & M--Two weeks is really, really young! I didn't even know you could get a dog that young. Speak to someone who knows about what to expect from such a young puppy in terms of training it (and if you can afford it, my friends swear by professional trainers--just get a good recommendation). But once this puppy is trained, it will be great. My dog is so clean and is able to let me know when he needs to go out. and he sleeps through the night. And no terrible twos!!! Hang in there, it'll be worth it in the end.

The puppy is still at the shelter with its mother. We'll be able to bring her home in a few weeks.

Baila, how did the dog die?

On a different note, I found this for you.
http://israeleasy.blogspot.com/2007/11/meat-cuts-explained.html

The dog was hit by a car. The car must have been going pretty fast, but the dog was not on a leash, so the driver probably didn't see it suddenly run into the street. He didn't stop, though...

We love (and miss) ozzie too. he is still the topic of coversation from time to time when we discuss the thought of getting a dog. We can't wait to see all of you in April