Ozzy goes to the beach....and other Independence Day Celebrations

Before I start this I should tell you, in case you didn't know, that pretty much the entire country celebrates Yom Ha'atzmaut with....mangol, baby. Loosely translated as "barbeque", it's entirely different from the kind of barbequing we did in America. Most of my suburban friends and I bought a gas barbeque as soon as we bought homes. We barbequed frequently from Memorial Day through Labor Day, and many of us even did so in the Fall and Winter. In Israel, all of that barbequing is concentrated into one day....today. And gas grills? Sure, they exist, but the real stuff looks like this: 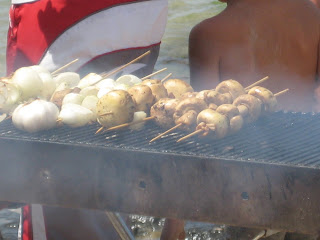 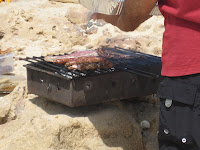 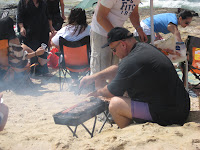 We spent the day at the beach, eating sandwiches (I know, I know) and then came home and did our mangol on our mirpeset [porch]. We also decided to bring Ozzy to the beach for the first time ever. Here in Israel we always see dogs on the beach, chasing and retrieving balls in the surf and seeming to have a great time. Why not Ozzy? HAH. Our plan was to go to Chof Palmachim in the city of Rishon L'tzion. Since the opening of the new road (Route 431) from Modiin, Rishon is 20 minutes away--and it was, even today, one of the most traveled days of the year. As we passed parks and forests, we marveled at the sheer number of people out and about and....mangoling. When we got to the beach, we parked with no problem, but Ozzy freaked out at the loud music and the mass of humanity literally camped...everywhere. We decided to head for a part of the beach about a kilometer away that was not officially open--no lifeguards and not recommended. Just tell that to an Israeli. After parking the car, Ozzy reluctantly came with us. This part of the beach was plenty crowded, but not as...teeming as the other. It was....a tent city. 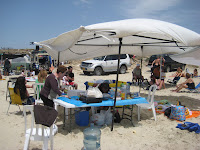 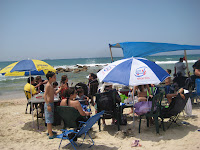 Families and extended families just set up shop, put up a tent or an awning, fired up the mangol and were good to go. 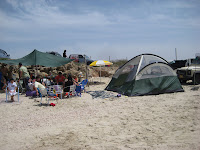 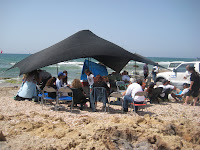 One family came with a huge speaker system hooked up to their car, so we had Israeli music for entertainment, 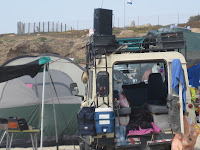 complete with karaoke and dancing. After we settled in, one jeep pulled up all the way to the water, effectively blocking our view. He backed up a bit, parked and proceeded to unload all of his paraphenalia. 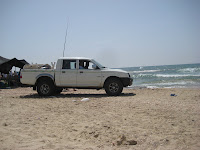 Ah, well. These are my people, my nation! 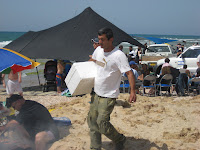 Of course, the day would not have been complete without a man carrying a styrofoam box in his right arm and holding a cigarette in his left shouting "ARTIC!! HALLO!! ARTIC! LIMON, BAHNAHNAH!"(Artic are ice pops) and a flyover, courtesy of four el-al planes: 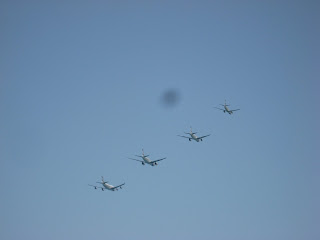 And Ozzy? After his initial trepidation, he got right into the swing of things. He even found a friend: 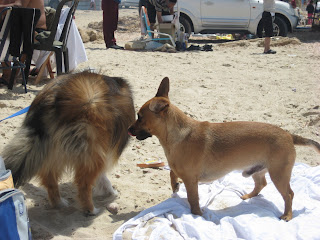 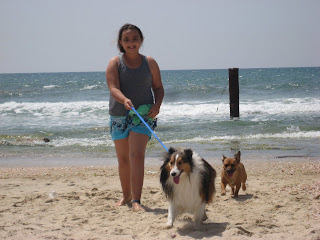 Hasn't this dog ever read "He's just not that into you?" 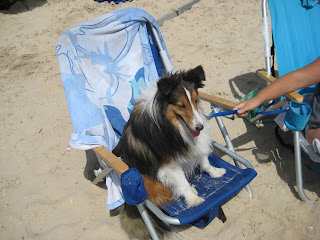 
And here he is really getting into the spirit of things:

So, how did you spend the day?


I know it's late in the week, but I still wanted to let you know that Haveil Havalim # 214 is up at the Rebbetzin's Husband.
Posted by Baila at 9:59 AM

WOW!!! I learn at your feet. You have become "a real Israeli," meaning that you go to the illegal beach. My heroine! (Sigh.) I will forever be a "freier."

I did the Omega (and didn't embarrass my sons too much); and we did the "mangol, baby" at home after a hike through the Gush with our very nice community. (We followed Benji's definition and each ate a cow.) It was a totally lovely day. Great way to thank Hashem for this amazing land.

Here too we don't use gas barbecue but charcoal. Looks like everyone had a great day, Ozzie included.

I still can't believe you did that Omega. And I think the signs at the beach were "suggestions", not outright laws (how's that for Israeli logic). And are there even any cows left in this country after yesterday???

I think that real connoisseurs of barbequing believe that charcoal gives the best flavor.

BTW, Ruti, embedding the video took like 27 hours or something.

What Omega??? I missed something somewhere!

We watched the Chidon HaTanach then visited your neck of the woods, where my in-laws live, for a pseudo BBQ (hamburgers and hotdogs broiled in the oven) with the family.