*[Hamentaschen are a traditional cookie that is triangular shaped and filled; it is prepared for the Jewish holiday of Purim which begins sundown, tonight.]

When I was much, much younger (and obviously, single) I used to think I would be a great mother. I really did. I envisioned playing endless games of Candyland, fingerpainting, baking together and in general completely and totally encouraging my children that were yet-to-come to be creative and independent thinkers.

And until Liat turned about two-years-old, that is exactly what I did. Why, I let her crawl everywhere in an effort to encourage her exploration of the environment. This came in particularly handy when she would crawl under the table. I rarely had to use a broom in those days.

When she turned two, we moved into the house in Cedarhurst,complete with finished basement. "Perfect", I thought. "Let my child's creative juices flow". I bought her an easel (Remember Little Tikes?), and stocked up on Play-Doh, of course with all accessories that Toys R Us sold. After we settled into the house, I took Liat down to the basement and began the process of painting with her. In about three seconds, I realized two things: I hated painting with a 2-year-old and that although the idea of a basement is great, no 2-year-old can be down there alone without supervision. Or wants to be. I remember finishing up the activity quickly and telling Liat "Listen you'll be doing plenty of painting and play with play-doh when you start Pre-school. No need to do it at home." She looked at me adoringly (because in those days that's how she always looked at me) and proceeded to have one of those two-year-old tantrums. You know the ones that make you wonder....well, never mind.

But I never learn. It was a few years later, in my never-ending quest to be a great mom, that I announced to the girls (by then they all had arrived)that we would be baking Hamentaschen together. I wanted to give them an experience that they would remember forever. Have you ever tried to bake Hamentaschen with three children ages 1 1/2, 3, and 5? Of course, you have, because you also want to be a great mother. In that case, you must know that I did indeed create a memorable experience for them. One they'll probably need years of therapy to forget.

And so, over the years I have looked my shortcomings as a mother in the eye and I have faced them. Admittedly this has become easier as the girls have become older. They now know that I can be short-tempered, get cranky when we go shopping for clothes and hate to bake and cook "together". They hear me use occasional expletives and tolerate it. They also know that I have a good sense of humor with them, am patient with all their dramas and will defend them to the end of the earth if need be. 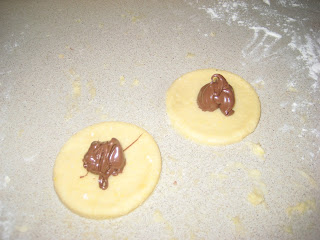 Yesterday we baked Hamentaschen together. And I barely got my hands dirty. They are old enough to get out the ingredients, measure, mix, cut out the shapes, fill them and put them in the oven. There was a bit of discussion regarding filling the circle shapes. We used Nutella chocolate, because really it's their favorite so who am I kidding by putting other stuff in it (only next year Robin is going to remind me to buy the cheaper Israeli version of Nutella because it's just as good. Right, Robin?) I told the girls to use less chocolate and close up the Hamentaschen tight so they would not split open in the oven. My kids didn't care if they opened, they just wanted lots of chocolate. Here's how their Hamentaschen came out: 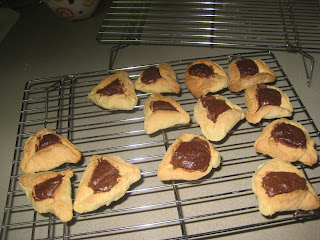 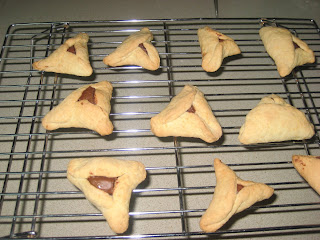 And here are mine:

Ten years later. Making Hamentaschen with kids ages 11 1/2, 13 and 15 is a whole different ballpark. What a great time we had.

Maybe I'll make Mother-of-the-Year after all.
Posted by Baila at 6:44 AM

In our house, the rule is that one is only allowed to eat the "open" hamentashen before Purim. The "good" ones have to be saved for Purim itself.

Imagine, then, everyone's dismay when Every. Single. One. stayed closed this year...
:-)

Happy Purim to you and yours!

We also eat the open ones and save them for Purim itself, Mrs. S. Enjoy your Purim!

I love this post. My kids are now 5 and 8 so baking with them is getting easier, but still takes twice and long and requires that I put my OCD tendencies firmly under lock and key.

I will concede to surrepticiously reshaping a few of the hamantaschen as I placed them on the tray, and checking all the seams to make sure they'd stay nice and closed ;-).

PS Yup, the cheap stuff worked just fine LOL. Yours probably appealed to an adult palate more though. Mine definitely had that air of "zaharon" about them.

I am with your kids when it comes to Hamentaschen. The more chocolate, the better!

That's my problem! OCD! I don't LIKE paint all over the floor or my skirt or Hamentaschen that are open....but I'm learning to let it go.

Even bad chocolate is good to me.

quote "one of those two-year-old tantrums. You know the ones that make you wonder....well, never mind." unquote
I guess 1 year 9 months and 3 weeks is close enough...
Baila, I'll have to call you, we need to talk...

but enjoy those tantrums, because--guess what?--teenagers have 'em, too--and they have a much more sophisticated vocabulary!

Harder than teaching my kids to bake hamantaschen was teaching my husband. But I've succeeded! He and three kids (ages 6, 12 and 14) all prepared the hamantaschen, rolling and pinching sides included. I only provided the recipe and the ingredients. And I ran away.

When my kids were two, I made muffins for Purim.

This post made me laugh out loud (again). Thanks Baila. Jonathan likes to bake and cook with me, he is the only one who does. I wonder how long it will last?

I used to bake hamentaschen every three years -- that's how long it would take for me to forget how much I hate the mess.

For the past few years, my kids would bake hamentaschen with my sister, since she got all the baking genes from my family.

So, while I am out of the running for mother of the year, she is way at the top for aunt of the year!