On Sunday of Chol Hamoed we took a trip up to this beautiful area of Israel. As many of you probably know, it's hard to go anywhere in this country without finding some remnant of an ancient era gone by, be it Roman, Crusader, Byzantine or Ottoman. But Caesarea is a real jewel among the ruins. Caesarea is the ancient port city built by King Herod (who has done alot of building around the Holy Land). He actually built a harbor from scratch. How he did it was an engineering marvel; I never can fathom how the people in ancient times built these huge projects without the benefit of modern technology.

Anyhow, it was a perfect day. We started the day off at the aqueducts. Caesarea had no rivers or springs, so drinking water for the Roman and Byzantine city was brought via an aqueduct from a spring in the north. (How did they know how to do that??) What remains of the aqueducts today is breathtakingly beautiful with a backdrop of the Mediterranean Ocean: 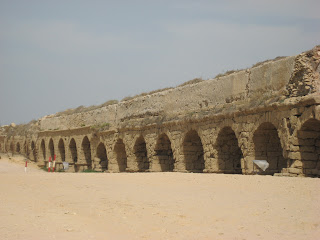 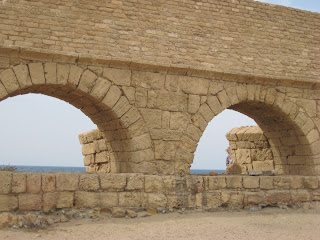 We went for a little walk on top of the aqueducts. It looked like a good idea at the time, but my fear of heights got the better of me and I quickly climbed back down to the sand: 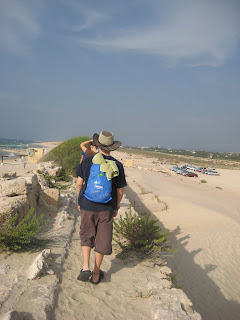 I couldn't resist taking this photo of a man saying the afternoon prayers: 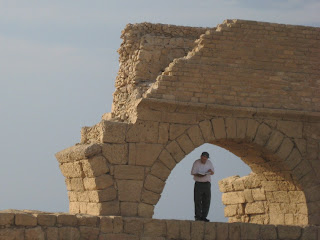 We spent a good deal of time climbing around the ancient ruins. We paid a bit extra to see a film first that told us exactly what we were looking at. This is what remains of a temple that Herod built to honor the king, Caesar. A few centuries later crusaders built a church on the site. Today, both are in ruins: 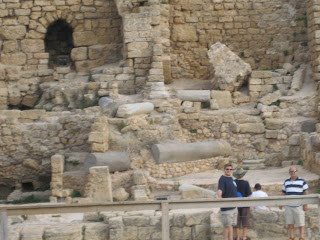 From a distance you can see what remains of the harbor in the water. Caesarea is popular with scuba divers who explore the underwater ruins. Here's what's left of Herod's harbor, that isn't under water: 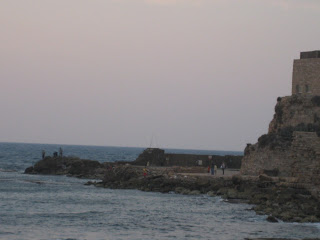 And here's a very authentic Roman trying to contact the Caesar himself via cell phone. I told you those ancients were amazing! (This particular Roman was the subject of much speculation about--well never mind.): 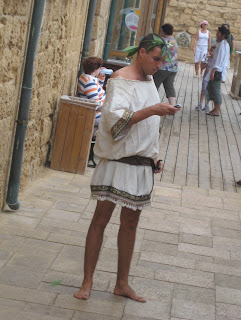 I'm sure you all must have seen your kids holding up their phones or cameras to take self-portraits. Teens do this all the time. They take pictures of themselves in groups, then look at the pictures and break into hysterical laughter. My teen took one with me (of course this has nothing to do with Caesarea, we just took the photo on its beach): 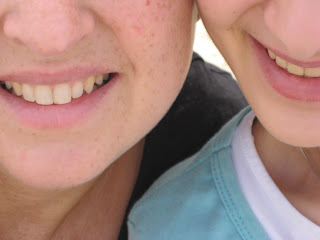 We also took pictures of me with a giant, naked green statue (Was that supposed to be Herod? It it was, I guess he thought much of himself). And no, I won't be posting that picture on the internet.

The weather was perfect--comfortable and breezy. This place is so beautifully maintained and easily accessible. We could have spent hours more there wandering around the ruins, but the sun began to set and we knew it was time to head home: 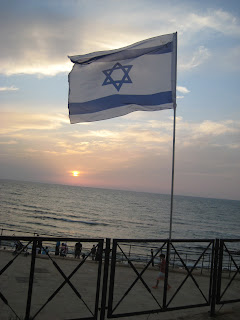 The perfect end to a perfect day.
Posted by Baila at 7:07 AM

[smiles] It sounds like an absolutely marvelous family-bonding day. And, I dunno, kid... those teeth and those aqueduct shots... there is an artistic theme playing here.

We won't even mention the ancient kilt question... but, really -- did they find cell phones at Masada???

You, Jameel/a and RivkA need to open a chol hamoed tour company.

Sounds like fun. It's been on our list of places-to-go for a while now.
Did you have a tour guide or did you just wander around by yourselves?

I like the smiles. They liven up all those old ruins. Glad you had such a great day!

great pictures, went there on my last visit, it really is amazing especially when you see what it looked like fully built back in the day.
sz

Glad you guys had such a fun outing! It really IS a cool place.

Yes, it really is a fun place to visit. And you don't need a tour guide, it's really do-it-yourself. The film, which costs 15 shekel is worth seeing to let you know the history of the place.

Cute pics! The Romans of course had free in-empire calling.

The large green naked man (or naked large green man?) is a statue dating from the modern Israelite period, and commemorates the PaLYam, the naval wing (fin?) of the PaLMaCH underground, who landed immigrants there under the noses of the British (who knew but turned a blind eye most the time, as long as it was done quietly without fanfare.
I don’t have a picture at the moment, but here is a link to a picture of me diving the wreck of an immigrant boat, scuttled purposely at Ceisaria in order to provide foundation for a breakwater

by the way, the statue is not all that well endowed if you know what I mean, at least not by British standards….